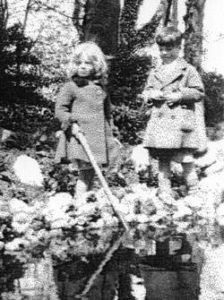 Jocelyn Ratcliffe, now  the owner of Penhellis and wife Daphne continued to live in Falmouth. His sister Monica and mother Margaret continued to live at Penhellis. Margaret was a keen gardener, a breeder of wire-haired fox terriers. President of the W.I. and quite late in life had two Jersey cows, who grazed the two remaining fields. She made her own cream and butter.

In 1938 Jocelyn’s sister Enid married Seymour Schofield of Godolphin. He rowed for Cambridge at Henley in 1922, and wrote a book “Jeffreys of the Bloody Assizes”. They had one daughter, Loveday and lived in Suffolk. Monica married Robert Garland in 1941, they lived at Penhellis for some time and later built Robin Hill in Cross Street. Loveday, Monica, Gladys and Joan were given away by Jocelyn and all four were married at Helston.

With the threat of war the evacuation of children was organised. West Ham Secondary School was sent to Helston. Penhellis was a temporary home. One child was Bryan Forbes. He describes the experience in one of his books. We believe he spent most of the war at Porthleven.