Frederick Vivian Hill (pictured right) became a solicitor in the family firm and lived at Penhellis until his death. He never married. There is a small book of his “The Poems of William Cowper Esq.”; in it is written “This book was presented to Mr. F. V. Hill on his leaving for Rugby School on the 19th August 1847 by the servants in his Father’s house as a mark of their high respect & grateful acknowledgements for the gentlemanly and kind conduct he always evenced towards them”. Following in his fathers footsteps, Frederick Hill junior was Mayor of Helston eleven times.

c1890 – Frederick Vivian Hill (before the bow window was added) 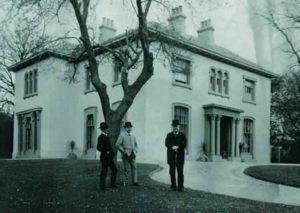 Georgina married Richard Phillips of Coventry and died 1916.  Humphry married Lavinia Webb and died at Torquay, 1912. Pascoe was a solicitor, died in Plymouth 1881, unmarried. In 1856 Emily was married to John Ratcliffe at Helston, John was Lord Chief Justice of India and had been widowed twice before. He had two sons, Charles and Thomas, both vicars. Together they had 9 children; Albert Edward, born India, 1863, Loveday Rhoda, Emily Georgina, Mary Louise (died in infancy in India), Caroline Lucy, Humphry Grenfell, Ethel, Oliver Prothero and Decima.

Following the death of Frederick Vivian Hill in 1904, the property was left to his sister Emily’s eldest son, Albert Edward Ratcliffe with a proviso that Loveday should remain in the house until her death.