The name Penhellis translated from the Cornish language means “Head of the Town”.

We believe that Frederick and the six children  moved to the new house about 1840. 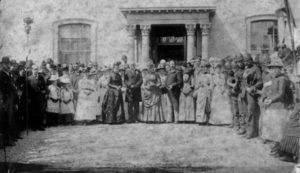 Helston in earlier days was called “Hellys” or “Henliston”. The house was surrounded by farmland which we believe already belonged to Frederick prior to building the house. The old farmhouse is now The Vicarage, the farm buildings now Trehane and the old barn was converted in 1972 to a three-bedroom house with the adjoining field. Immediately behind the house was the orchard and the land extended to what is now Osborne Parc and Grylls Parc.

The house consisted of three ground-floor rooms, a huge kitchen with stone floor, two Cornish ranges, a scullery with open spit, a boot room and a laundry room with copper. The only heating was from coal fires. Water was supplied by four wells. There were three servants. On the death of Frederick Lobb Hill in 1874,

the property went to his eldest son, Frederick Vivian Hill.